This is in response to a query from Jonas K. See my post you can lead a horse to water, and take a look at the comments. OK, I’ll start again from the beginning, Jonas, you’re blue:

Textbook optical clocks of the bouncing-photons-kind go slower when lower in a gravitational field, yes. So do Cesium-based atomic clocks, by exactly the same amount. Why is that?

It’s because a Cesium-based atomic clock has an electromagnetic nature. Take a look at the NIST caesium fountain clock: 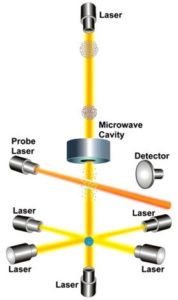 The second is defined as “the duration of 9,192,631,770 periods of the radiation corresponding to the transition between the two hyperfine levels of the ground state of the caesium 133 atom”. Then see the Wikipedia hyperfine structure article,  which says this: “In atoms, hyperfine structure arises from the energy of the nuclear magnetic dipole moment interacting with the magnetic field generated by the electrons and the energy of the nuclear electric quadrupole moment in the electric field gradient due to the distribution of charge within the atom”. So it’s clear enough that the Cesium atomic clock operates via electromagnetism, which I think ought to satisfy you that it’s going to slow down like the idealised bouncing-photon clock.

Why should it be that two so different kinds of clocks, based on entirely different mechanisms, end up slowing down by the same amount? Please provide detail, not references. Thanks.

It’s because gravity has an electromagnetic nature too. A gravitational field is a place where the speed of light is spatially variable, and the speed of light c = 1/√(ε0μ0). The permittivity and/or permeability of space is varying. This affects all electromagnetic phenomena. I talked about the wave nature of matter, how pair production worked, and about the electron being a 511 keV photon in a spin ½ closed-path configuration, but I don’t think you need to know any of that to know that the Cesium clock is going to slow down just like the photon clock.

Thank for replying! I realize now that my request for details in a comment section like this was a bit much to ask for. Perhaps some day you will find the time to give a fuller answer in a separate post; it would be much appreciated. What I’m driving at is this: it seems that your account of the slowing down of optical clocks relies on special properties of photons.

In that case, there is no reason to expect clocks based on other mechanisms to slow down at all, let alone by the exact same amount.

See above re the Cesium clock. That’s going to slow down in line with the photon clock. Because electromagnetism is ubiquitous. I’m pretty sure the nuclear force is electromagnetic too. And take a look at this picture:

In low energy proton-antoproton annihilation, we sometimes see two gamma photons. That says to me that the strong force has an underlying electromagnetic nature too.

Now, logically, one of the following is the case:

1) all clocks, whatever their mechanism, when experiencing acceleration/gravity slow down by the same amount; or

I’d say that’s true with the exception of the grandfather clock, or any pendulum clock. The clock rate depends on the force of gravity rather than the depth of potential. Hence a grandfather clock would go faster at a lower elevation.

2) there are at least two different kinds of clocks that slow down by different amounts (or speed up, or are unaffected) when experiencing acceleration/gravity.

Let’s pretend that pendulum clocks don’t exist. That said, I opt for option 1,

I favour option 1, and would say that all clocks go slower when they’re lower because light goes slower when it’s lower, and because matter is in essence “made of light”.

Either way, I’d like to see your derivations of the quantitative behaviour of the clocks. Thanks!

There’s not much to say about the quantitative behaviour of clocks. They go slower when they’re lower because of the wave nature of matter, and because those waves go slower when they’re lower, because space is affected by a concentration of energy in the guise of a massive star. As for a derivation, l said something about time dilation in the nature of time. I said it’s based on Pythagoras’s theorem. See the simple inference of time dilation due to relative velocity on Wikipedia:

The hypotenuse of a right-angled triangle represents the light path. The base represents my speed v as a fraction of c. The height gives the Lorentz factor, which can be written as √(1 – v²/c²). If I travel at .99c, the Lorentz factor is √(1-.99²/1²) = √(1-.98) = √(.02) = .1414, which is a seventh. So my clock clocks up one year while yours clocks up seven. The Lorentz factor is that simple, and it applies to everything because of the wave nature of matter. Robert Close talked about this in the other meaning of special relativity. We can make electrons out of light in pair production, and we can diffract electrons. Remember what Feynman said about around and around, and think of electron spin as light going round a circular path. Then look at it sideways like this: |. Then set it moving so that the circular path looks like a helical path. Sideways on, it would look like this: /\/\/\/\. It’s just like the light bouncing back and forth between the parallel mirrors, and it’s why time dilation applies to electrons and other particles too, and me, and you.

(Your answer here is obviously incomplete since it makes no reference to the specific functioning of Cesium-based clocks, but again, it was unreasonable of me to demand details in a comment.)

Great, I’m looking forward to it. It sounds like you’re going with alternative 1), in which case you agree with the mainstream physicists who say that “time slows down” in a gravitational field; for all they mean by that phrase is precisely that all processes slow down by the same amount. Of course you might have some other disagreement with them, but I’ll let you explain yourself in a post. Please take your time, I am interested in seeing the quantitative details of your position and I’m happy to wait for them (and I imagine your other readers feel the same).

Formulas are of course necessary if you wish to make clear how your position differs from the mainstream. Again thanks!

I’m afraid formulas just can’t help with all this. My position is this: I’m with Einstein. The mainstream isn’t. But I hope that one day, it will be.

Yes, that’s about it.

Does this cover time dilation due to relative velocity, too?

Yes. I said “think of electron spin as light going round and round”. I think it’s similar for the proton. That has spin too. The proton g factor is circa 5.85.  It’s nearly three times the electron g factor, and it’s there because spin is a real rotation:

I think you’re right that formulas are not much help in this particular context unless you are going to get into how electromagnetism accounts for/gives rise to the strong and weak forces too.

I don’t think formulas would help with that either. Mathematics is a vital tool for physics, but it doesn’t help you to understand the physics.

But basically I’m trying to understand what your disagreements with standard physics are, and that requires getting to predictions at some point.

I’d say “standard physics” isn’t really physics any more. It doesn’t offer any understanding. It doesn’t tell you how gravity works, even though Einstein explained most of it. It doesn’t even tell you how a magnet works. even though Ampère explained most of it. As for predictions, I’d say one prediction is gamma ray bursts. If you drop a brick into a black hole it erupts into a gamma-ray burst. Sadly Einstein didn’t predict this. I think he could have done in his 1939 paper on a stationary system with spherical symmetry consisting of many gravitating masses. But in 1939 I guess he had other things on his mind. Funnily enough it was the detection of gamma ray bursts that reawakened interest in general relativity in the 1960s. The USA launched satellites to detect Russian nuclear tests, and they detected gamma ray bursts instead. See Wikipedia: “Kip Thorne identifies the “golden age of general relativity” as the period roughly from 1960 to 1975 during which the study of general relativity,[29] which had previously been regarded as something of a curiosity, entered the mainstream of theoretical physics[30]”. General relativity entered the mainstream in the 1960s. But the version of general relativity that became mainstream flatly contradicted Einstein.

This is why I’m hoping to see some formulas that I could use myself. You tell me (to take just one example) that an electron is a photon moving in a certain configuration, but I’m unable to derive any consequences of this claim.

Here’s a consequence: if you drop an electron into a black hole, it will erupts into a gamma-ray burst. That means conservation of charge is not absolute. How cool is that? But I think the important thing is understanding. You can actually understand what happens in Compton scattering and why an electron goes round in circles in a uniform magnetic field. You can understand why two electrons repel, why two positrons repel, and why an electron and a positron attract.  You don’t need to invent virtual particles popping into existence, spontaneously, like worms from mud.

I really don’t see how the mainstream physicist disagrees with Einstein if they agree on all predictions. Saying “time slows down” and “light slows down” sounds different, but again, mainstream physics is not committed to any doctrine about time: that claim is just shorthand for “every process slows down by the same amount”.

Mainstream physics is committed to the doctrine that the speed of light is constant. It isn’t. Because of this, mainstream physics doesn’t understand why light curves. It claims that light curves because it follows the curvature of spacetime, which is wrong. It’s all downhill from there, ending up with fantasy physics about the black hole information paradox, and futile dreams of quantum gravity.

Perhaps the question I’m working my way toward when trying to understand your writings is this: do you make any predictions that differ from those of mainstream physics?