There’s a lot of articles about magnetic monopoles. See this for example: the hunt for magnetism’s elementary particle begins. It dates from 2016, and it’s by Avaneesh Pandey. He says this: “magnets, for reasons we still do not understand, seem to exist only in the form of dipoles – ones with a north and a south end. Break a bar of magnet into two, and you still do not get a magnetic monopole. Instead, you now have two smaller magnets, each with its north and south pole”. There’s a link to the paper on the arXiv with an impressive list of contributors, and very nice picture to help with the visualization: 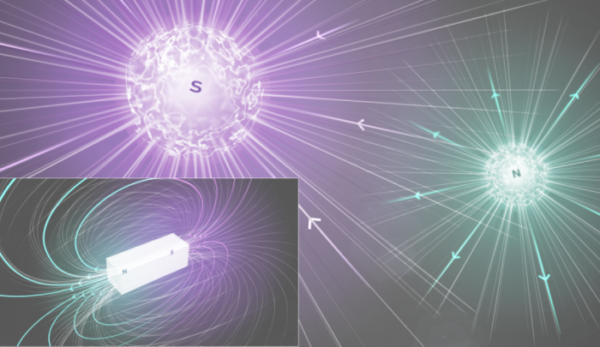 Pandey says electricity has its positive and negative charged particles, and asks how scientists can isolate “magnetism’s elementary particles – the monopoles”. He says they’ve remained infuriatingly elusive. You can find other articles such as mysterious monopole remains elusive. It dates from 2013, and it’s by Devin Powell. He says more or less the same thing: “In standard electromagnetic theory, isolated positive and negative electric charges exist, but magnetic poles always come in pairs”. He says to fix this asymmetry, Paul Dirac proposed the existence of magnetic monopoles. Another article is the hunt for the truest north. It dates from 2016, and it’s by Matthew Francis. He gives this quote: “The electric and magnetic forces are exactly the same force,” says Wendy Taylor of Canada’s York University. “Everything would be totally symmetric if there existed a magnetic monopole. There is a strong motivation by the beauty of the symmetry to expect that this particle exists”.

You see repeated references to symmetry when you read about monopoles. Search the Wikipedia monopoles article for symmetry or symmetric, and there’s 22 matches. The article refers to Maxwell’s equations, saying they provide for electric charges but not magnetic charges. And that except for this difference, the equations are “symmetric under the interchange of the electric and magnetic fields”. It then says you can write fully-symmetric Maxwell’s equations if you allow for the possibility of magnetic charges. This desire for symmetry drives physicists to search for magnetic monopoles. They say things like the existence of monopoles is “one of the safest bets that one can make about physics not yet seen”. There’s just one little problem: magnetic monopoles do not exist. Yes, you can contrive a very long solenoid, so that the other pole is out of sight and out of mind. And you can do something similar in condensed matter physics to create an effective magnetic monopole. But that’s not a real magnetic monopole. It isn’t what particle physicists have been hunting for with no success. I think that when you look closely at electromagnetism, you can appreciate why there’s been no success. Let’s start with a bar magnet.

A bar magnet consists of a North pole and a South pole. It’s a dipole, not a monopole. At first glance one might think that breaking a magnet in half will yield two monopoles. But it won’t. In 1822 Ampère said magnetism was the result of electric currents circulating in planes perpendicular to the axis of the magnet. He said each particle of the magnet would be surrounded by a circular current. There’s a modern picture of such Ampèrian currents on Ampère and the history of electricity. It’s by Gérard Germain, from Physique Terminale C dating from 1983: 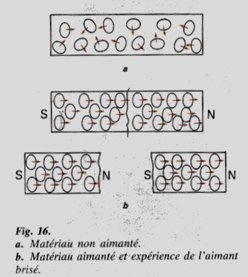 A solenoid has a magnetic field much like a bar magnet. Ampère invented the word solenoid in 1820. He said “if the spirals acted like magnets, it was because magnets owe their magnetism to electric currents in planes perpendicular to their axes”. 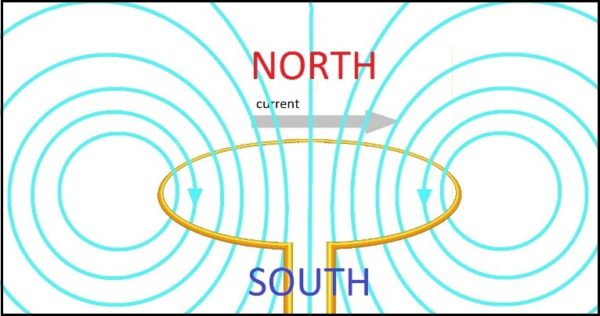 But note that the poles aren’t in the centre of the concentric circles. The poles are orthogonal to the concentric circles, because those circles are only depicting a slice through the magnetic field, which is toroidal. The poles are above and below the torus, in the middle of the loop. And just as there are no one-sided coins, there are no one-sided loops. There are no torii which have an above but no below. Slicing the loop in half horizontally won’t separate those poles. It will merely give you two sets of poles, like breaking the bar magnet in half. You don’t end up with a monopole. And nor do you end up with a monopole when you straighten the loop out.

The wire is not a monopole

At first glance the current-in-the-wire looks something like a magnetic monopole. It doesn’t have a dipole field. You depict it with just one set of concentric circles, using the right-hand rule. The field is actually cylindrical, but we typically depict a slice through it like so: 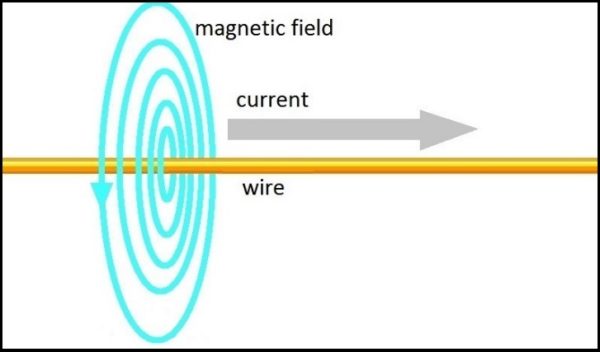 Note though that there is no pole at the centre of the concentric circles. Also note that you can’t point to a pole that’s orthogonal to the concentric circles. There is no place you can point to and say this is the North pole. Or the South pole. And yet we still have magnetism. Two wires with currents flowing the same way will attract one another. When they do, you might be tempted to say one’s a North pole and one’s a South pole. But the two wires are the same, and two North poles repel, they don’t attract. Ditto for two South poles. You only get repulsion when the two wires have currents flowing in the opposite directions. To achieve that you rotate one of the wires lengthwise through 180 degrees. That’s like flipping a bar magnet over lengthwise, swapping the North and South poles over. So it’s like one wire is a North pole and the other’s a South pole. But now the two wires repel. This is breaking the rules of North poles and South poles. We still have magnetism, all we’ve done is straightened out the current loop. But whilst the wire loop has a North pole and a South pole, a straight wire doesn’t have either. It’s more of a nopole than a monopole. So you won’t find a monopole here. Or anywhere else. To look at this more closely, I think the best thing to do is zoom in on the wire, and look at what it’s made of: charged particles.

The charged particles in the wire

The wire is made of copper. We have electrons that move and we have copper ions that don’t. Whilst a copper ion is far more complicated than an electron, it’s made of protons and neutrons. Since a free neutron will decay into a proton plus other things, let’s simplify the copper ions down to protons. Our wire is effectively a cylinder of electrons and protons, with the electrons moving from left to right. Each electron has a magnetic dipole field, as does each proton. Neither the electron nor the proton has a monopole field, for a very simple reason.

The electron can be likened to a tiny bar magnet, or a current loop. Obviously this is not conduction current, which is typically the macroscopic motion of electrons. Instead it’s displacement current, and it’s associated with a very real angular momentum, as evidenced by the Einstein-de Haas effect. As Feynman said: “If you look at the energy flow, you find that it just circulates around and around”. He was talking about the Poynting vector, in an example in which an electric charge and a magnet are at rest near each other:

Why there are no magnetic monopoles

The electron doesn’t have an electric field, it has an electromagnetic field. So it doesn’t have an electric charge, it has an electromagnetic charge. So the whole idea of magnetic charge is misguided. It’s the wrong symmetry, a desire for beauty borne from a total lack of understanding of electromagnetism. It’s a castle in the air with no foundations. Hence hunting for magnetic monopoles is a waste of time. It’s a wild goose chase. It’s a fool’s errand. There are no magnetic monopoles because of the screw nature of electromagnetism, which is all about twist and turn. To make an electromagnetic field you twist space, and then you can move through it such that it looks like space is turning. Or it moves through you. Either way the result is a “rotor” field, with a North pole and a South pole, because the North pole is just looking at the rotation from one direction, and the South pole is just looking at it from the other. There are no one-sided coins, and there are no regions of space turning round and round like a ball in a socket. That’s what you’d need for a true magnetic monopole. There are no discontinuous spheres of rotating space, because space isn’t like that. Because it’s a continuum, like a gin-clear ghostly elastic solid that sustains transverse waves which can get wrapped and trapped in a closed spin ½ path. Instead there’s something akin to frame-dragging going on, where space is twisted, only in three dimensions, with curl and chirality. If there wasn’t, particles wouldn’t be charged particles. Magnetic monopoles do not exist, because if they did, there would be no such thing as charge.