I’m sorry I haven’t posted for months. Part of the reason is that the day job has been extremely tough this year. It’s a lot to do with Covid. As you will know if you’ve applied for a driving licence or booked a flight, a lot of organisations are not functioning effectively right now. That’s due to past layoffs, or staff going part time, or retiring, or “working from home”. In addition, training is more difficult when people are not in the office, and it all puts pressure on other people. People like me. All too often I’ve been good for nothing when work is finally over. Hence the physics has taken a back seat of late. Utmost apologies. Not that there’s been that much happening in physics this year. I was spectacularly unimpressed with the axial Higgs boson. See the phys.org article dating from June 8th 2022:

Caption: An interdisciplinary team led by Boston College physicists has discovered a new particle – or a previously undetectable quantum excitation – known as the axial Higgs mode, a magnetic relative of the mass-defining Higgs Boson particle, the team reports in the journal Nature. Credit: Nature (2022). DOI: 10.1038/s41586-022-04746-6

The Nature paper is available online, see Axial Higgs mode detected by quantum pathway interference in RTe3 | Nature. However it will cost you $32. A better option is to read it for free on Sci-Hub, wherever it is now. But of course Springer etc have been waging a whack-a-mole war on Sci-Hub. That’s because their racket is that we pay for science through our taxes, and then we can’t see the resultant garbage because it’s protected by a high high paywall. Sadly I couldn’t get the paper from Sci-Hub, so the arXiv preprint will have to do. It says things like “we discover an axial Higgs mode in the CDW system RTe3 using the interference of quantum pathways”. Along with “One example is the attempt to extend the standard model by enlarging the symmetry breaking. This results in additional particles, including a spin-1 Higgs boson, and dark matter candidates.1 Thus the detection of a Higgs mode with finite angular momenta (i.e. an axial Higgs) heralds the discovery of a heretofore undiscovered symmetry breaking and novel phase of matter”.

An analogue, found in a physical material, which cannot exist outside of that material

It might sound great, but it isn’t. It’s just 21 pages of handwaving horseshit from people who know nothing about fundamental physics. People who are winging it with a nod and a wink from Nature. Don’t just take my word for it. Check out what Matt Strassler said in his blog article News Flash: Has a New Axial Higgs Boson (Possibly Dark Matter) Been Discovered? The answer was No. No, no, no. Closely followed by “I was tempted to blame the science journalists for the incredibly wrong articles about this, but in fact it seems entirely the fault of the scientists involved”. He also said it was an analogue, found in a physical material, which cannot exist outside of that material. Hence it was a “bait and switch”. Peter Woit was similarly disparaging in his blog article Physicists Discover Never-Before Seen Particle Sitting On a Tabletop. He said “there’s rarely any downside for the scientists and PR people who produce such bogus stories”. He also said “the Higgs hype has been extended to add quantum computing hype, see Newly-Observed Higgs Mode Holds Promise in Quantum Computing”. What a pity he didn’t say that about the Higgs boson itself. And what a pity Matt Strassler is equally uncritical in his latest post The Standard Model More Deeply: Masses, Lifetimes and Forces. But such is life.

Another science story I didn’t like was the Event Horizon announcement on May 12th. They say they’ve captured an image of the black hole at the centre of our galaxy. That’s Sagittarius A*. It’s thought to be circa four million times the mass of the Sun, and at most thirty times bigger than the Sun in terms of spatial extent. Again take a look at the PhysOrg article: Making sense of the nonsensical: Black holes and the simulation library. It talks about “snapping an image”, and an “actual black hole image”, but that’s not what we’ve got here. Event Horizon is an array of radio telescopes. They don’t snap an image. They provide data, which is then converted into an image:

Remember the 2019 announcement of the first image of a black hole? That was M87. See Katie Bouman ‘hardly knew what a black hole was.’ Her algorithm helped us see one. They didn’t capture an image, they captured data which was used to create an image. Note this: “There’s an infinite number of possible images that could have been created from the sparse measurements that we took”. Also note this in the Wikipedia article: “the observed image is consistent with expectations for the shadow of a spinning Kerr black hole”. Then note that Kerr black holes are associated with time travel, wormholes, and other universes. When you know that these things are science fiction, you know that something is wrong here. Take a look at the papers, which you can find in Focus on First Sgr A* Results from the Event Horizon Telescope – The Astrophysical Journal Letters. You can read this: “We find remarkably good consistency with a black hole described by the Kerr metric”. Then you can follow the links and read the individual papers, such as First Sagittarius A* Event Horizon Telescope Results. I. The Shadow of the Supermassive Black Hole in the Center of the Milky Way. Note this in section 5: “Interferometric imaging algorithms seek to produce images from this sparse Fourier-domain information that are consistent with the data and physically plausible”. Then see the first paragraph of section 6. They did not snap an image, they created an image “under the assumption that Sgr A* is a Kerr black hole”. Images that are way too like the Interstellar image of Gargantua, used by Cooper to time-travel back to Murph’s old bedroom. That’s science fiction dressed up as bona-fide physics, courtesy of Kip Thorne, who really ought to know better.

Hype for the hoi polloi and not much substance

Anyway, things have been fairly quiet this year, perhaps because a lot of physicists have been “working from home” too. I have a Telegraph subscription. It’s a quality newpaper with a good science content, but there’s not been much physics and cosmology recently. One story of note was Gaia mission reveals tsunami-like ‘starquakes’ among new secrets of the Milky Way. That was on the 13th of June and was written by science editor Sarah Knapton. She wrote Head of Nasa: ‘We’re taking UFOs very seriously’ on the same day. I found that interesting. Ditto for an article on 4th May called There’s a reason why aliens haven’t visited Earth yet, say scientists. Yeah right. But as I said, there hasn’t been much physics and cosmology of late. There’s rather more on the down-market Express website, which is actually rather for good for news and views. It’s much better than the BBC or the Guardian, especially when it comes to physics and cosmology. There was a story on May 12th headed Space breakthrough as hidden ‘scalar field’ may solve universe’s most elusive force. It was a fun read, in part because I think Robert Dicke was getting warm. But as ever there was a lot of hype for the hoi polloi and not much substance. It referred to an arXiv paper called Stronger gravity in the early universe by Motohiko Yoshimura, who unfortunately does not know how gravity works. It was similar for End of the world: Universe could start shrinking ‘remarkably soon,’ scientists warn: Caption: The end of the world could start ‘remarkably soon’ (Image: GETTY)

That was a story on May 3rd about a PNAS “big crunch” paper by Cosmin Andrei, Anna Ijjas, and Paul J. Steinhardt. Don’t any of these guys ever read the Einstein digital papers? Methinks the answer is no. It’s the same for the old quantum mechanics papers of the 1920s.

But of course, what I’m really pleased about is the James Webb Space Telescope (JWST). Right now this feels like the only flame still lit for physics and cosmology. Hence like a lot of people I’m relieved that there’s been no showstoppers. There have been four strikes by very small micrometorites, which have done no harm. But at the end of May there was a larger strike. See the Verge article for a nice report: NASA’s new powerful space telescope gets hit by larger than expected micrometeoroid. However it was still very small, circa 0.1mm in diameter, and it looks like “the telescope should still perform great science”. It certainly does look like that. The first image, released on Monday 11th July 2022, is an image of galaxy cluster SMACS 0723, which is at a proper distance of 5.12 billion light years. It shows quite obvious gravitational lensing. It looks good when you compared with the same picture taken by Hubble, in 2017 I think, as part of the RELICS survey:

The JWST image on the left is a better picture, and the JWST exposure time was only 12.5 hours. I’m reading that the Hubble exposure time was weeks, but I’m struggling to check that out. I’ll dig around. Meanwhile it looks similar for the JWST image of the Southern Ring Nebula when compared to the Hubble image from 1998. See the NBC news article Compare photos from NASA’s James Webb Space Telescope and the Hubble Space Telescope:

There’s five images as I write. Another one is Stephan’s Quintet: It’s “a visual grouping of five galaxies of which four form the first compact galaxy group ever discovered”. It was discovered by Édouard Stephan in 1877 at the Marseille Observatory. 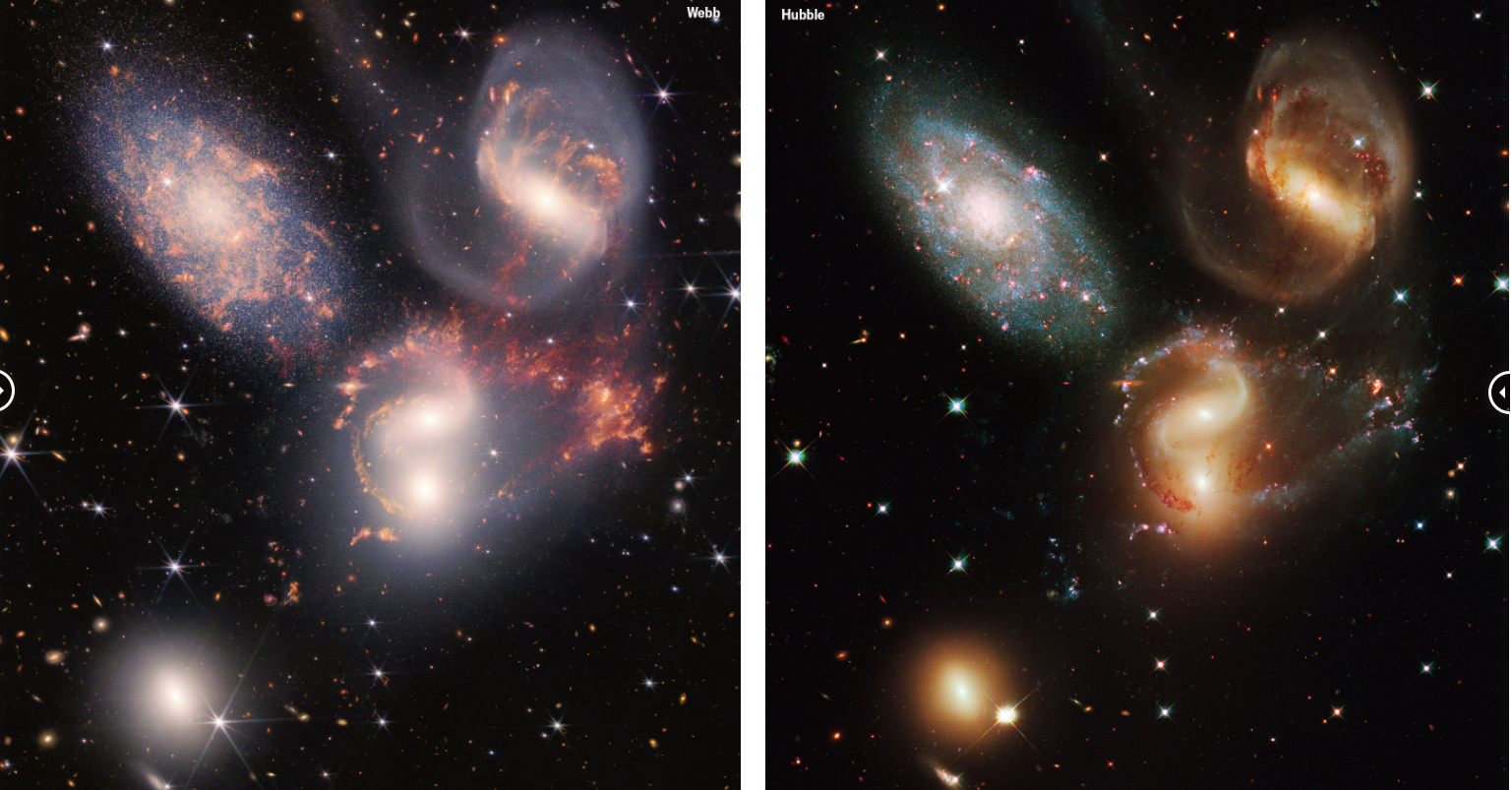 Then there’s the “cosmic cliffs” of the Carina Nebula, with a lot more pinpoint stars along with other detail. You think you’ve got a great image, and then you find out you’ve got a better one:

Finally we have the a spectrum rather than image, showing the presence of water on WASP-96b. It’s a distant exoplanet, and a gas giant, so it’s no Earth. And obviously there’s no comparable Hubble image. But no matter, it all goes to show what Webb can do. I think it’s great. Well done NASA. And the ESA and the CSA. Well done to everybody involved. Thanks guys.

PS: I now work four days a week. From home!