Pair production is the creation of a particle and its antiparticle. Some say it was first observed in 1929, but it’s usually accredited to Carl Anderson in 1932. He used a cloud chamber and an electromagnet to investigate cosmic rays. He effectively split a gamma photon over an atomic nucleus to create an electron and an antielectron. He called the latter the positive electron, which was soon shortened to positron:

However whilst he realised that he’d discovered the positron, he didn’t realise that he’d performed pair production. See the APS physics article Focus: Landmarks: The First Antiparticle. It tells how “learning of Anderson’s discovery, Patrick Blackett and Giuseppe Occhialini, also at Cambridge, conducted cloud-chamber experiments in which they saw simultaneous production of positive and negative electron pairs in cosmic ray collisions”. Also see Blackett and Occhialini’s paper presenting some photographs of the tracks of penetrating radiation. You need a gamma photon with an energy of over 1022 keV to perform electron-positron pair production, because the electron and positron have a mass of 511keV/c² each. They also need some kinetic energy to fly apart, and some energy is lost to the nucleus by virtue of conservation of momentum.

The experimental discoveries were timely. They confirmed Dirac’s 1931 prediction. This was perhaps a lucky break for Dirac, who had arguably moved the goalposts in response to Oppenheimer’s 1930 paper on the theory of electrons and protons. But no matter, in his quantised singularities in the electromagnetic field, Dirac said this: “we may call such a particle an anti–electron. We should not expect to find any of them in nature, on account of their rapid rate of recombination with electrons, but if they could be produced experimentally in high vacuum they would be quite stable and amenable to observation. An encounter between two hard γ–rays (of energy at least half a million volts) could lead to the creation simultaneously of an electron and anti-electron”. Dirac referred to an encounter between “two hard γ–rays” or two gamma photons. It’s a more purist procedure than splitting one gamma photon over a nucleus and turning it into an electron and a positron. It’s known as gamma-gamma pair production or two-photon physics, and is typified by the Breit-Wheeler process dating from 1934. Two gamma photons are converted into an electron and a positron via a process that’s the reverse of electron-positron annihilation. It was performed indirectly at SLAC in 1997. More recently physicists at Imperial College London have proposed a more direct method. See the press-release article scientists discover how to turn light into matter after 80-year quest. It says “this experiment would recreate a process that was important in the first 100 seconds of the universe and that is also seen in gamma ray bursts, which are the biggest explosions in the universe and one of physics’ greatest unsolved mysteries”. The light-into-matter quest has been going for more than 80 years since those heady days of the nineteen thirties. If you go back to Skobeltsyn in 1929 it’s 89 years. If you go back to Einstein’s E=mc² paper in 1905 it’s 113 years. And if you go back to Newton’s Opticks query 30 in 1704, it’s 314 years and counting: “are not gross bodies and light convertible into one another?” Yes they are, in pair production and annihilation:

Images from Ethan Siegel’s starts with a bang, image credit © Addison-Wesley, retrieved from J Imamura / U of Oregon

Gross bodies are also converted into light in gamma ray bursts. They aren’t much of a mystery once you know why matter falls down, but we’ll come back to that. Meanwhile the important question is how does pair production actually work? Perhaps surprisingly, there seems to be no official answer to this at present. Perhaps even more surprisingly, there seems to be no official question either. Back in 1927 Dirac came up with second quantization, which includes creation and annihilation operators, which “add or remove a particle from the many-body system”. In gamma-gamma pair production, the annihilation operator makes the photons disappear, and the creation operator makes the electron and positron appear. It might be beautiful mathematics, but it isn’t physics. It offers no explanation of how pair production works, and as such is no better than magic. In fact, it’s worse, because the story goes that particles materialise and dematerialise, which is lies to children.

Take a look at the Wikipedia two-photon physics article. It talks about gamma-gamma pair production, and it’s in line with what particle physicists say. It originates from the HEP group at UCL. Their 1997 small tutorial in gamma-gamma physics says this: “From classical electrodynamics we know that EM waves pass through each other without any interference. From Quantum Electro Dynamics (QED) we know that photons cannot couple directly to each other, since they don’t carry charge, but they can interact through higher order processes: a photon can, within the bounds of the uncertainty principle, fluctuate into a charged fermion/anti-fermion pair, to either of which the other photon can couple”. It sounds reasonable enough, especially since it matches the Feynman diagram:

See the diagram on the right. Two photons enter from the bottom, then the leftmost photon fluctuates into a positron and an electron. This electron then absorbs the other photon, whereupon the positron and the electron depart the scene. However when you stop and think for a minute, this is most definitely lies-to-children. It’s fairy tale physics. Not just because the positron has an arrowhead going the wrong way because it’s supposed to be an electron going back in time. But because a 511keV photon does not spend its life fluctuating into a fermion/antifermion pair. A 511KeV photon does not magically morph into a 511keV electron and a 511keV positron. That’s in breach of conservation of energy. In similar vein a 511keV electron and a 511keV positron cannot magically morph back into a single 511keV photon. That’s in breach of conservation of energy and conservation of momentum. And conservation of angular momentum too. Moreover photons travel at the speed of light whilst electrons and positrons don’t. So if a photon did somehow manage to fluctuate into a fermion pair and back again, it couldn’t be travelling at the speed of light. Some will say that’s OK, the initial electron was off shell, so we don’t have to trouble ourselves with tedious little matters like conservation of energy. Only we do, because there are no perpetual motion machines. And because virtual particles are virtual. As in not real. The clue is in the name. Virtual particles aren’t short-lived real particles that obligingly pop in and out of existence spontaneously, like worms from mud. Instead they only exist in the mathematics of the model. That’s why hydrogen atoms don’t twinkle, and why magnets don’t shine. And for the cherry on top, pair production does not occur because pair production occurred. Spontaneously, like worms from mud. That’s what this official explanation of pair production is saying. It is not satisfactory. Not by a long chalk.

The hole in the heart of quantum electrodynamics

When you probe further you find that there are no other explanations forthcoming. Some particle physicists will say pair production occurs because two-photon physics goes through higher-order processes. Some will say it occurs because pair production is probabilistic. Some will even say physics only needs to yield accurate predictions, and doesn’t need to offer any explanation or understanding. Some physicists are emphatic about this, and dismiss any call for explanation or understanding as mere philosophy. It’s a strange state of affairs. Particularly when it’s clear that photons interact with photons. You started with two photons, you ended up with an electron and a positron. Ergo the two photons interacted, QED. That’s the quod erat demonstrandum QED. The quantum electrodynamics QED says they don’t. It says electron-positron attraction occurs because the electron and the positron are exchanging photons. They aren’t. And when they annihilate it isn’t because they exchange an electron. Electron-positron pair production does not occur because one of the photons turns into a positron and an electron which then interacts with the other photon. QED even gets Compton scattering wrong. The electron doesn’t emit one photon then absorb another photon and change direction. The electron and the photon interact directly, and when you understand the photon and the electron you can understand how. Just as you can understand how photons interact directly and how gamma-gamma pair production works. Sadly Feynman called QED the strange theory of light and matter. He said “my physics students don’t understand it either. That is because I don’t understand it. Nobody does”. It would seem this situation persists. Even though we do physics to understand the world, not to shut up and calculate. 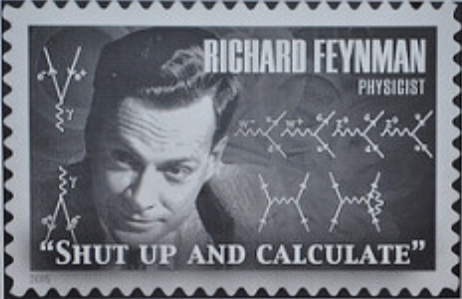 Image based on US Postal service stamp, see The Story Behind the Stamp by Kate Repantis

The issue here is that QED describes the interaction between light and matter, but not the interaction between light and light. On page 193 of their book climbing the mountain: the scientific biography of Julian Schwinger, Jagdish Mehra and Kimball Milton say Wolfgang Pauli proposed a solution for the infinite charge density problem. They also say this: “in the resulting improved theory, not only was the picture of the vacuum simple again, but there were now only three fundamental interactions between the electrons, the positrons, and the photons: the scattering of the fermion with the emission or absorption of the photon, and the annihilation or creation of the electron–positron pair with the emission or absorption of the photon”. The interaction between photons had gone. Pauli had thrown out the baby and kept the dirty bathwater. Because that new improved picture wasn’t just simple, it was wrong. Because it didn’t describe what actually happens in gamma-gamma pair production. It still doesn’t. Even to this day quantum electrodynamics offers no picture of what happens in gamma-gamma pair production, and hides this deficiency with lies to children. Because it still relies on its canonical creation and annihilation operators, and so absolutely misses the crucial point that waves interact.